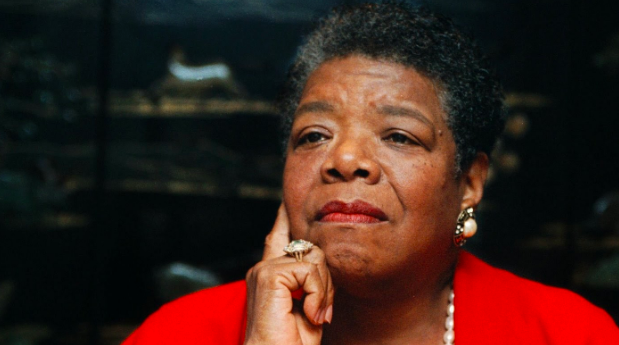 In honor of Black History Month, I want to celebrate the incredible poet Maya Angelou. She’s been my favorite poet since I was in fourth grade. We performed “Caged Bird” as a class, and soon I was in love with her poems. Since then, I’ve recited her poems “Still I Rise” and “A Brave and Startling Truth.” Angelou has inspired my love of poetry and literature. Furthermore, her ability to overcome obstacles and keep her head up has inspired me to stay courageous and always be the best person I can be.

Maya Angelou was born on April 4, 1928, in St. Louis, Missouri. For most of her childhood, she lived in Stamps, Arkansas with her grandparents, but when she wasn’t in Stamps, she lived in St. Louis with her mother. Throughout her childhood, she developed a love for Black writers such as Langston Hughes and Paul Lawrence Dunbar. These writers sparked Angelou’s love for literature.

After she graduated 8th grade, she moved to California and ultimately ended up in San Francisco, where she went to California Labor School on a scholarship and participated in acting and dancing.  In San Francisco, she became the first female streetcar conductor. Not only did she work on the streetcars, but she also worked in night clubs, restaurants, and even a mechanic’s shop. She graduated high school, and when she was 17, she gave birth to her first son, Guy.

Soon after, Angelou moved to New York and joined the Harlem Writers Guild, which encouraged and cultivated creativity for Black writers in the city. It was started in 1950 when Black writers were excluded from mainstream culture. In that group, she got to hear Martin Luther King, Jr. speak and developed a passion for civil rights. Soon, she became the Northern Coordinator for Dr. King. After working for King, she moved to Africa, where Maya lived in Egypt and Ghana while working for the African Review.

When she came back to the States in the mid-1960s, she was encouraged by her close friend James Baldwin, an accomplished writer, poet, and playwright, to write an autobiography. In 1969 she thus wrote I Know Why The Caged Bird Sings, which became an immediate success and was followed by five more biographies

In her career, she acted, performed, danced, and wrote not only biographies but also widely celebrated poems. Many of the poems she wrote depict Black beauty, social justice, and female strength and explore themes dealing with the struggles Black Americans face in modern society. She continued to write poetry and expand her career on television, where she was the first Black female director.

Later in life, she was a professor at Wake Forest University. She passed away in 2014 at the age of 86 in Winston Salem, North Carolina.