Leaders or Children? What SLS Students Should Learn from the 2020 State of the Union 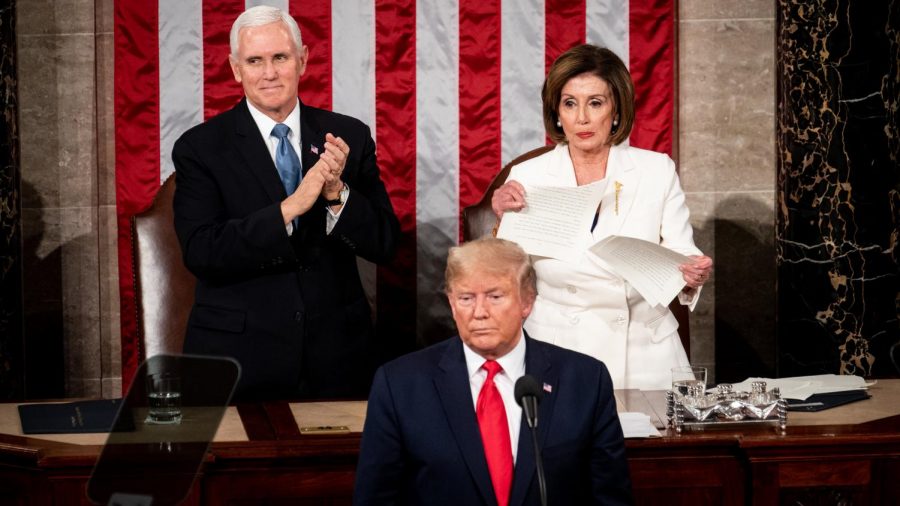 On Tuesday, February 4, President Trump delivered his third State of the Union address (full transcript here). The speech made headlines, not because of its content but because of the divisive behavior President Trump and Speaker of the House Nancy Pelosi exhibited throughout the event.

Delivered to a joint session of Congress, the State of the Union is an annual event in which the President gives an update on the American economy, celebrates his achievements in office, and gives projections for the future.

The event began with a moment of apparent partisanship. When President Trump rose to the podium, he turned to hand Vice President Mike Pence and Speaker Pelosi copies of his speech. After taking her binder, Speaker Pelosi offered a handshake to President Trump, but he appeared to reject it. President Trump was turning around as Speaker Pelosi extended her hand, so it is unclear if his rejection was intentional. The interaction sparked outrage on social media from those who believed Trump’s apparent refusal was a symbol of his resentment for Speaker Pelosi, who pioneered the impeachment trial against him.

The tension in the air seemed to fade during President Trump’s speech. President Trump celebrated the “great American comeback” of the past three years, citing job creation, decreasing poverty and crime rates, and rising incomes as his administration’s primary successes.

Throughout the speech, President Trump highlighted audience members seated throughout the Gallery, including American heroes like Charles McGee, one of the last surviving Tuskegee Airmen, and the family of Army Staff Sergeant Christopher Hake, who was killed in 2008 while deployed in Iraq.

The most heartwarming moment of the night came when President Trump thanked military spouse Amy Williams for her sacrifices to the country before revealing that her husband, Sgt. First Class Townsend Williams, had returned from deployment in Afghanistan. The family’s reunion evoked bipartisan applause, and members of Congress enthusiastically chanted “USA!” as Sgt. Williams hugged his wife and children.

Speaker Pelosi’s actions immediately created an uproar on social media. Conservatives argued that ripping the speech was disrespectful to the American heroes highlighted in it, and President Trump seemed to agree: he retweeted a video created by Freedom Fights — a branch of the conservative group Turning Point USA — which showed Speaker Pelosi ripping the speech between clips of the military members and families. The video already has 12.1 million views, and over 90,000 people have reposted President Trump’s tweet.

Speaker Pelosi disagreed that her gesture was disrespectful, instead calling it a “dignified act.” Pelosi claimed that she “tore up a manifesto of mistruths,” and that Trump’s speech was “full of lies.” Speaker Pelosi argued that tearing the speech was “necessary to get the attention of the American people to say, ‘This is not true, and this is how it affects you.’” (source)

Speaker Pelosi protested the Freedom Fights video retweeted on President Trump’s social media. Her office asked Facebook and Twitter to remove it, arguing that it was “deliberately designed to mislead and lie to the American people.” The companies refused to remove the video, as it did not directly violate their policy on manipulated media.

What happened at the State of the Union wasn’t professional or an example of mature behavior that should be modeled in the government. President Trump’s and Speaker Pelosi’s behavior contradict our school’s goals.

At St. Luke’s, we practice and celebrate civil discourse through CGL groups and classroom discussions. We strive to have conversations about challenging topics and hope to learn strategies for disagreement. In those discussions, students are pushed to dig deeper into opposing views rather than rejecting new perspectives.

The interactions at the State of the Union should prompt St. Luke’s students to ask what true leadership looks like. At SLS, the Center for Leadership aims to “build skills that open the door to authentic leadership: effective speaking and listening, social and emotional agility, creative problem-solving and collaboration.” From what we’ve seen recently, our leaders don’t have most of these essential skills. We should keep the State of the Union in mind as we learn what it truly means to be a leader: someone who can listen to opposing beliefs and respond to tense situations with grace.