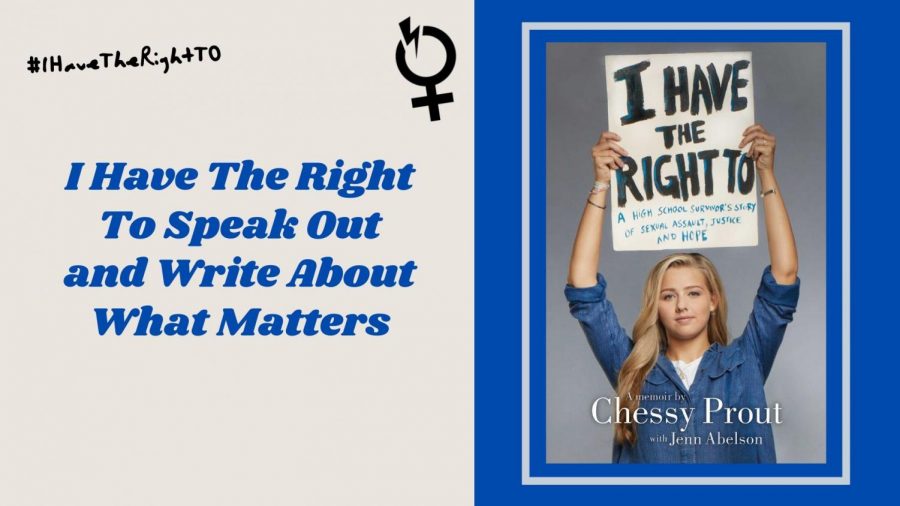 The act of someone taking advantage of your body without your consent can be unimaginably violating. Chessy Prout is a survivor. In 2014, Chessy Prout was a freshman at St. Paul’s School in New Hampshire when a senior boy sexually assaulted her. Not only is this illegal, but it is also incredibly dehumanizing and devastating to women.

After her assault, Chessy Prout decided to write a memoir in order to share her important story. At the time, she was one of the only people from her school to speak out about being assaulted and she showed incredible dignity and sophistication. Chessy started the #IHaveTheRightTo movement in order to uplift other survivors and encourage those assaulted to speak out about what happened to them.

At St. Paul’s’, the senior boys’ lifestyle centered around an ongoing competition they had to see who could “slay” the most girls. In an interview with People Magazine, at the beginning of her freshman year, Chessy said, “A group of boys on campus were in competition with each other to see how many girls that they could ‘slay’ as they put it. And they made a big long list of a bunch of girls’ names.” Chessy was on that list, and at the tail-end of this horrific competition, she was raped by a senior boy.

After the incident, Chessy spoke out about her rape. Instead of helping her recover from her trauma, many at St. Paul’s, besides her beloved counselor Buzz and a friend or two, shunned and rejected her. Chessy had to switch schools, but that did not stop her from telling the truth and speaking out for other survivors. Jenn Abelson, Chessy’s co-writer, said St. Paul’s even “tried to bully [Chessy] by threatening to reveal her identity” when she first spoke out anonymously.

At St. Luke’s, we do not have to be afraid of sexual assault. We have teachers and faculty who care about us and protect us. We have classmates who are kind and people who would never consider participating in such a horrific competition. We have a safe environment, where everyone can be who they are and say what they need to say without fear of what might happen to them if they speak out. We don’t have to fear being blackmailed by the school if something bad happens to us. We have a  caring, safe, kind school that we know has our backs at all times.

The environment at St. Paul’s “fostered a toxic culture that put [Chessy] and other students at risk for sexual violence,” Chessy said in her memior, I Have The Right To: A High School Students Story of Sexual Assault, Justice, and Hope. She also stated that “St. Paul’s seemed like a noxious breeding ground for the abuse of power. The entrenched male entitlement — along with the school’s ‘deny until you die’ mantra” had “allowed this abuse of power to thrive among faculty and students.” The worst part is that “it was undeniable that school leaders were aware of the sexual conquest games and did nothing to stop them.” Thankfully, St. Luke’s has the opposite environment as to what St. Paul’s had. I feel safe knowing that our teachers care for and protect us.

Prout created the “I Have The Right To” movement  as a way for girls and women to claim our rights, protect our rights as human beings, be heard, be believed, and have the opportunity to seek justice. It is a way to empower people and to unite survivors around the world. “I Have The Right To” promotes women to stand up for their rights and to share their experiences on social media using #IHaveTheRightTo.

Too often, survivors of sexual assault are labeled as alleged victims who are just crying out for attention. Survivors have a right to be called survivors and not to be victimized when they speak out. Countless times, survivors are blamed for what happened to them. People ask, “Why didn’t you fight back?” or “Why didn’t you shout for help?” Freezing is a natural response to trauma, and being blamed for their assault does not help survivors’ healing process.

“It’s not a survivors job to protect themselves against rape. It’s the perpertrator’s job not to rape,” Chessy said in her interview with People. It does not matter what the survivor was wearing, whether it was a winter jacket and jeans or a bikini — no means no. It will never be okay, under any circumstance.

As a girl at St. Luke’s, I have the right to a safe education and I have the right to feel safe and protected at school. Thankfully, I don’t come to St. Luke’s in fear; but that was not the case for Chessy. At St. Luke’s, I know that my teachers care about me and that our school culture encourages unity, love, and inclusion. I am not trapped in a toxic environment where sexual assault is considered somewhat “normal,” and I am so grateful for that. We must spread the idea that this type of behavior is not okay. We must spread our inclusive, loving, culture to other schools because we need to put an end to sexual assault once and for all. No one, male or female, should ever be put through the trauma of rape. The #IHaveTheRightTo movement was made to uplift survivors, but any of us can join the movement and claim our rights. I Have The Right To speak out and write about what matters.