Bring on the Band: Pandemic Does Not Stop the SLS Bands from Making Music 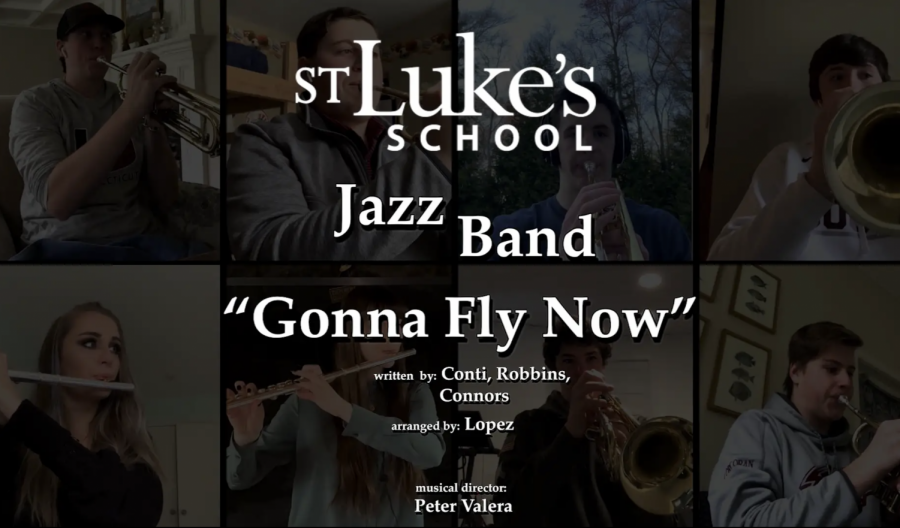 The Upper School Concert and Jazz Bands have practiced since December for the annual Spring Concert. Now, because the COVID-19 pandemic canceled all on-campus classes and events, band instructor Mr. Valera has found innovative ways to unite the band and share music with the SLS community.

Like many SLS classes that have moved to distance learning, Mr. Valera’s band class does not meet every day as a full group. Instead, each section of instruments meets once a week to allow for smaller and more manageable class sizes. For example, saxophone players meet on Tuesdays, while trumpet players meet on Wednesdays.

The limitations of technology became a challenge to Mr. Valera when he first attempted to run his class as normal through Zoom. Since the application spotlights only one participant’s audio, it is difficult to have students play online together. Additionally, the poor audio quality coupled with a video lag made it impossible to run a proper rehearsal. Mr. Valera shared, “I tried to have everyone play on Zoom, and it was awful.”

Despite these problems, Mr. Valera still found an excellent way to run classes without playing together. Flutist Marguerite DeMarco ‘21 remarked, “We are still able to practice and appreciate music, even though classes are drastically different. Overall, class is more individualized now, which is kind of nice, as we are able to work on our own songs and really hone our skills.”

Even though the band was not physically together to have a concert, Mr. Valera still wanted the band to have a culminating project that the community can appreciate. While lagging Zoom streams would make it nearly impossible to do a virtual live stream of all the band students playing their usual four to eight songs, Mr. Valera thought that a video mashup would be the best way to share the music. The video includes clips of all band students playing the song “Gonna Fly Now” (the theme from the movie “Rocky”), composed by Victor López.

“Because we couldn’t have a live concert, I still wanted to put something out from the band. I felt that doing a recording or video project is definitely a different project than a concert, but because I know how to do all of that stuff, I thought it would be good,” explained Mr. Valera.

Mr. Valera has worked tirelessly on this project. He first asked all members to record a video of themselves playing the song. Once he downloaded all of the videos, he extracted the audio from each video and compiled them into an application called Logic Pro. He brought the videos into Adobe Premiere and added the edited audio to complete the project. The final product reflects his dedication to the band.

“I have been working 4-8 hours a day for a month. Towards the end of the month, I worked eight hours on it,” shared Mr. Valera.

Mr. Valera acknowledges that the project may have forced some students out of their comfort zone, as recording oneself is a very revealing experience. For instance, in a concert, if students were to make a small mistake, the audience would barely hear it among the other musicians. However, a recording can expose the player, and as a result, they may feel vulnerable. Understanding this reality, Mr. Valera explains, “I made it so everyone was featured in the best way possible. A recording would make sure that everything looked great.”

Drummer Sam Pakman ‘22 was impressed with the simplicity of the filming process. “Mr. Valera, as always, worked his magic to figure out a way to get the St. Luke’s band back together by having each of us record our parts at home. I personally found the process pretty simple. I recorded each individual drum into a single audio track and then filmed two separate video angles to match the audio recording.”

While the video project was a success, Mr. Valera hopes that if students are allowed to get back together in the fall, they will be excited to learn new material for a Winter Concert. For the seniors who will not be returning to the Hilltop in the fall, he hopes they will continue to develop their musical talents at college.

“Music is always going to be there to play and to have as an outlet. You can get involved in a band in college, record, or write. It doesn’t have to be your primary area of study,” he reminded senior musicians.

His message to the Class of 2020 can also be generalized to all SLS musicians, especially since we are approaching summer break. While the season’s activities may be limited, at least music can be there to help students get through these stressful times.

When we look back on distance learning in the future, we will have artifacts, just like Mr. Valera’s video, that highlight the efforts of all band members and their conductor. It will also demonstrate that even during SLS at Home, we all tried to maintain a strong sense of community, just like the one we experience on-campus.