During quarantine, Ryan Sherman ‘21 dedicated his time to studying Spanish independently in order to better understand the language and culture. 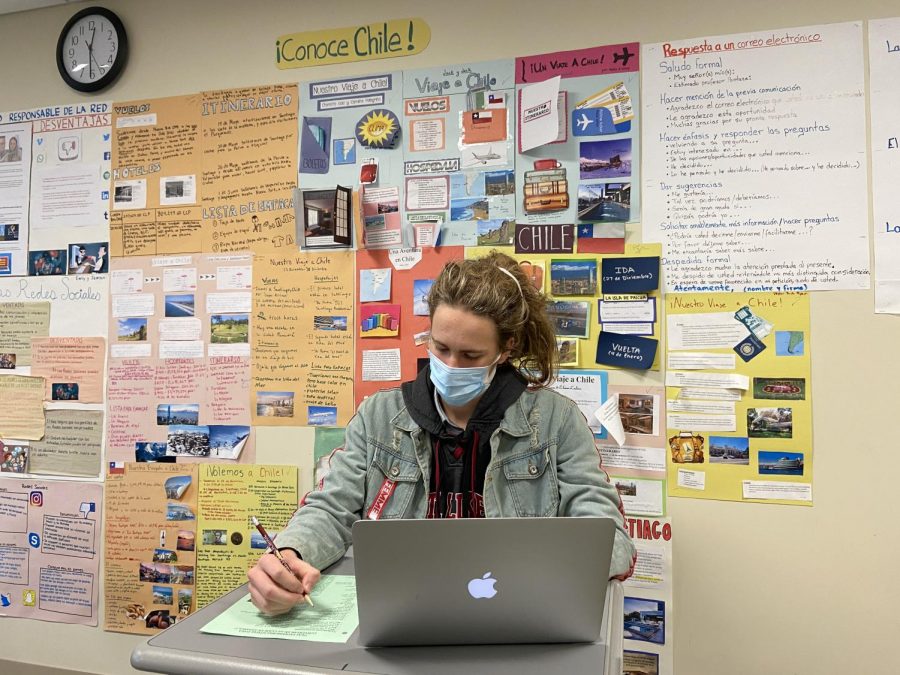 While some spent the spring quarantine binge-watching Tiger King and All American, Ryan Sherman ‘21 was dedicating hours of his time to learning Spanish. He jumped from Spanish 1 to AP Spanish in the span of just one year. Ryan has been busy conquering the Spanish language.

Ryan spent some of his childhood living in Brooklyn, where he was exposed to many different Spanish-speaking cultures. Because of this early introduction to the Spanish language, Ryan had already been interested in the language for quite some time when the world shut down in the early spring.

When quarantine began, watching YouTube videos of people speaking different languages inspired Ryan to dedicate himself to learning Spanish. As the 2019-2020 school year came to an end, Ryan’s mastery of Spanish 1 resulted in his move Spanish 3 Honors. Once Ryan began this class with Mrs. Meatto, she realized that he could handle a greater challenge, and he was moved up to AP Spanish with Mr. Pontaza.

“Little by little, I started noticing he was using really complex forms at the drop of the hat, not using a dictionary, not spending hours at home trying to figure it out, just casually,” Mrs. Meatto said. “Stuff that even kids in Spanish 5 and often in AP have a hard time with and he was just doing it. And then it hit me that maybe he needed to be in an even higher level.”

Ryan’s goal at the beginning of quarantine was not to reach AP Spanish; rather, he aspired to challenge himself for the sake of personal fulfillment.

“All in all, reaching AP Spanish was not my ultimate goal, but rather to become fluent in Spanish,” Ryan said. “What was important to me was that I learn and improve as much as possible so that I could leave the school year being able to speak and understand Spanish. With that goal in mind, AP Spanish was the best choice.”

When asked why he decided to learn Spanish, Ryan said, “I have always been curious and have loved learning new things, so learning Spanish seemed like a challenge that I needed to conquer. It always stuck out to me as such a cool yet beautiful language, and the thought of being able to communicate in another language with tons of people around the world intrigued me very much. I was inspired, so I just went for it. So far, it has been one of the best decisions of my life. Now, there is a whole world ahead of me just waiting to be explored.”

Now taking an AP class is not easy, but Ryan is eager for the challenge. Ryan said, “It is a difficult class, but it forces me to push myself and to really learn a lot about the Spanish language and the culture of Spanish speaking countries.” AP Spanish has helped Ryan become more immersed in the language and culture.

When Ryan began studying Spanish in the spring, he used a program called Pimsleur, which is a website that allowed Ryan to acquire the language through speaking immediately rather than just learning grammar. After using Pimsleur for three months, Ryan started to adjust his focus to listening comprehension and reading. He watched lots of Spanish TV shows and movies as well as listened to Spanish podcasts and read Spanish books.

To work on his vocabulary, Ryan uses Memrise and Anki, two different programs which are helpful with memorizing vocabulary over a long period of time. They use spaced repetition systems, which means that whoever is using them has to remember specific words or facts, and they have to memorize it and use it after a certain amount of time. This helps the words to be ingrained in your memory.

Although Ryan used Memrise and Anki to learn vocabulary, his main focus was listening comprehension.

“Almost all of the independent work I did was input — hearing and reading the language,” Ryan said. “This is how we learn languages as babies, so in order to be able to understand a language, you have to immerse yourself in that language for hundreds to thousands of hours — depending on the language — so that is what I did.” Ryan is correct; as babies, we aren’t taught how to speak, we just speak based on whatever language we are surrounded with.

Due to school, outside activities and other commitments, Ryan has limited time he can dedicate to learning Spanish every day. Thus, he has found ways to incorporate it into his normal schedule so he can regularly immerse himself into the language.

“When I would drive to school, I always had a Mexican podcast playing, or when I do the dishes, I’ll plug in some earbuds and listen to a podcast,” Ryan said.

Learning a new language can be very difficult, whether you have studied it your whole life or you just decided to pick it up. But as Ryan said, “If anyone reading this is even remotely interested in learning another language, just go for it. It opens up so many doors and opportunities that you wouldn’t have had otherwise… While learning another language may be difficult, it’s worth it. I promise.”