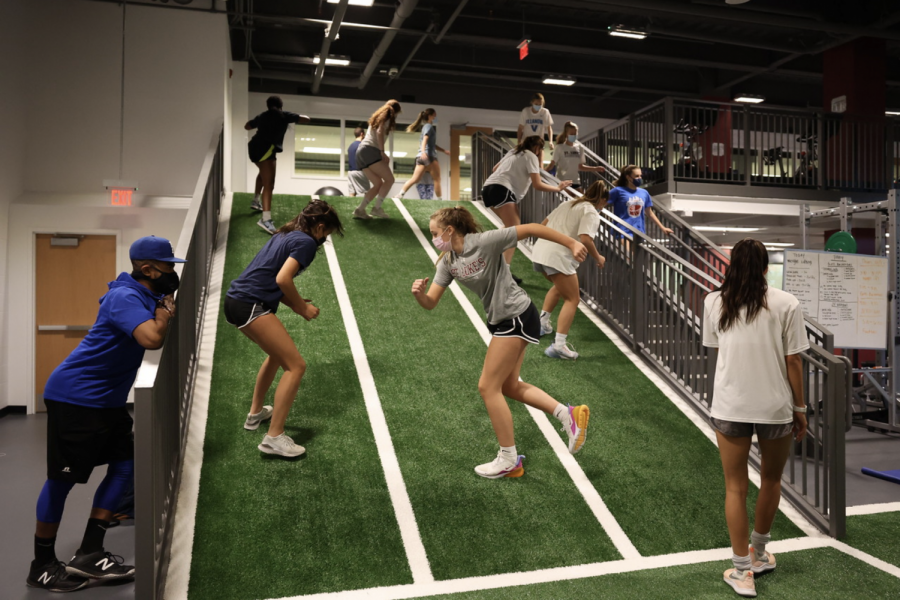 Only eleven short months ago, St. Luke’s basketball fans witnessed two exciting contests in Carey Gymnasium as both the boys’ and girls’ teams overtook the Greens Farms Academy Dragons to clinch their respective FAA championships. While watching sports may seem like an activity of the past, St. Luke’s winter sports programs have opportunities this season to continue to refine their skills and hopefully engage in memorable interscholastic competition at the varsity level.

On Monday, January 12, Athletics Director Mike West sent a Winter Athletics Update to students and families detailing the possible plans for the winter sports teams, highlighting two different possible scenarios. One scenario was that the state of Connecticut’s team sports pause would be extended, and in this case, the St. Luke’s Athletic Department was prepared to offer small group training sessions that all winter athletes could sign up to attend. Fortunately, as of January 20, the state of Connecticut has lifted the 52-day team sports pause, which enabled eager Storm winter coaches and athletes to return to the courts, ice rinks and slopes for team practice in their respective sports.

Videos posted throughout the past week on the St. Luke’s Athletics Instagram page highlighted our athletes excitement of returning to some sense of normalcy. However, practices have a different feel than in the past.  New protocols have been enacted by the Athletic Department to adhere to health and safety guidelines. Masks are worn at all times, and the teams are divided into smaller groups to reduce the risk of transmission of germs.

Wearing masks and being separated into pods bring about certain difficulties for the team players, especially when it comes to establishing team dynamics. Girls Varsity Basketball returning player Brielle Renwick ‘23 commented, “It is difficult to get to know some of the new players when we are separated and we have our faces covered.”

Prior to these practices, the Girls Basketball team met with each other via Zoom, but now that they are practicing in-person, they are able to build off of the connections they had established virtually. Head Coach Matt Ward said, “Now that we are back together, we will have much more time in person to bond and grow together.”

Regarding interscholastic competition, Mr. West mentioned in his note, “Competitive opportunities will be assessed as we move through our protocols and follow all state and local regulations.” Hopeful for possible competitions, Renwick says that “the girls basketball team is engaging in some competitive intra-squad drills and contests” in order to be prepared if the opportunity arises to go head-to-head against FAA rivals.

Regardless of whether  they return to a full game schedule or not, one thing is certain: St. Luke’s athletes will embrace every opportunity they have to improve their skills and to be part of the St. Luke’s Storm team. Returning Girls Varsity Basketball player Sophie Blomberg ‘22 said, “Although we all sensed a feeling of discomfort and unfamiliarity with the new layout due to Covid, I think we all came together and created an environment where we pushed each other to get better and encouraged one another to work hard no matter what may be ahead of us.”

Given the uncertainty of the rest of the season, the team is valuing every second they spend on the court. As Blomberg said, “My mindset is to practice like it’s going to be the last one because, as we have learned, we never know what is going to happen, so you need to make the most out of the situation you are in.”

While there are some St. Luke’s athletes who will go on to play at the collegiate level, for many athletes, this will come to an end after graduation. Being a member of a team goes beyond just the wins and losses. Participating in high school sports is also about creating memories, forming friendships, and learning lessons, which can all still happen during these uncertain times. Despite virus-related limitations, SLS coaches, upperclassmen, and captains are continuing to act as leaders in their programs, working to build team spirit and preparing themselves to be ready if the opportunity presents itself to resume interscholastic competition. And, while all of the teams continue to perfect their craft through the balance of the winter season, the SLS athletic community and fans eagerly await the opportunity to once again cheer on their favorite Storm teams.