Mr. Griffa and Mr. Valera share the thoughtful decision-making that went into keeping the music department running during this difficult time. 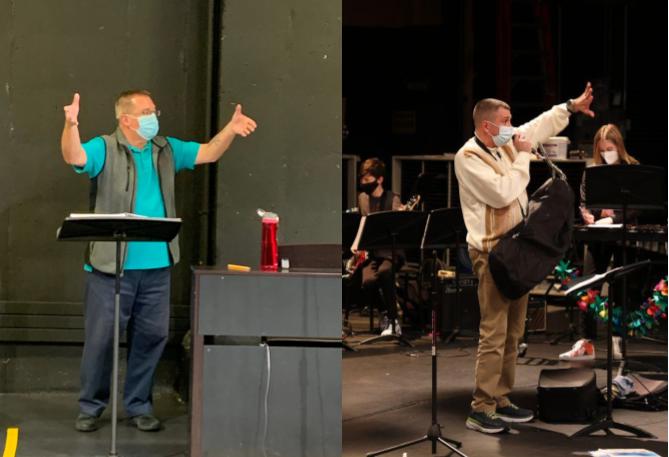 Covid has affected many people’s lives and day-to-day routines. Most of us have learned to adapt to masks and social distancing as part of everyday events like grocery shopping or studying in a public library. But what about certain activities that we can’t do with masks, such as singing or playing an instrument?

Band teacher Mr. Valera and choir director Mr. Griffa both explained the ways they have adjusted their classes in response to Covid guidelines.

“Band is so different this year,” Mr. Valera said. “Number one, we moved from our space in the band room to the Seldin Performing Arts Center, so it’s a whole different space, needing to get used to the sound out there.” The old band room has now become a classroom because it is too small for a music class with the new Covid guidelines.

“Then on top of that, with the new regulations we have to be twelve feet apart each way from our instrumentalists who use wind to play, so that limits the people who can play at a time,” Mr. Valera said. “We can only play for thirty minutes at a time as well, because we have to play and then let the air circulate.” With the new hour-long classes, playing for only thirty minutes makes the band curriculum move a lot slower than it normally would.

Mr Valera continued, “To add another layer on top of that, the flutes, the clarinets, [and] saxophones have to put their instrument in a bag when they play.” Mr. Valera explained that they have plastic bags with holes cut out for the player’s hands, and shared, “It’s very awkward to play.”

Similarly, students playing brass instruments like trumpets and trombones have to put covers on the ends of their bells. Because respiratory droplets are the leading cause of spreading Covid, protocols around instrument care and maintenance have also been updated.

Despite the many restrictions, Mr. Valera and his band students have found that with the hard work of the band members, Mr. Valera also found a new way to have the players ‘perform’ and show off their hard work by gathering recordings of each band member and matching and adjusting the sound. The recordings that were shown during our interview sounded amazing and were well blended together, which can be hard to do with so many different recordings.

With all these changes, Mr. Valera stated that he has been grateful to have found a way to keep the program running, thanks in large part to frequent collaboration with both Ms. Lauer and Mr. Griffa. Additionally, he continues to stay up-to-date on current guidelines and protocols to ensure that he is running a program in adherence with the latest rules. He stated that he wasn’t sure if the number of band members would be lower this year because he was nervous that students would feel intimidated by the restrictions, but he was pleasantly surprised by their enthusiasm and happy that the students seemed to adjust to the restrictions very nicely.

Choir adjusted differently, of course, due to the discrepancy in programs and curriculum. Mr. Griffa was thrilled that choir was able to continue this year, especially because a lot of his colleagues from other schools were not allowed to continue their choir programs. Mr. Griffa did a lot of research to make sure he was keeping everyone safe and his curriculum was following the rules.

The choir program also needed to limit singing time to thirty minutes, follow protocols surrounding air circulation, and replace concerts with recorded songs. However, they also needed to adjust their singing technique in response to state guidelines, as Connecticut requires singers to wear a mask if indoors and remain six feet by nine feet apart.

This was a bit challenging for the students at the beginning of the school year because with being so far from everyone else, most students could hear their own voices a lot more than their classmates’ which made them uncomfortable and quieter. However, students also needed to project their voices more to get through the mask, so it was an adjustment that the students had to make for themselves as singers.

To add another layer, some students have been in person while others Zoom from home, which makes teaching the class a little more challenging. According to Mr. Griffa, the students at home aren’t able to “participate in the same way due to the lag and latency issues.” Another challenge was with having most of the student’s family online for work or school due to Covid, singing or playing an instrument might interfere with the other family members’ meetings or classes who might need the house to be quiet.

However, since students are only allowed to sing for thirty of the sixty minutes of a class period, Mr. Griffa was able to work on certain activities that he had wanted more time for in previous years. For example, in the month of February, which is also Black History Month, all five choirs worked on a project where they chose a Black artist or musician that they wanted to learn more about. All of these projects were used as a database for future classes to look to for research, not only during Black History Month, but at any time. Mr. Griffa stated that he is taking this extra time to try to “incorporate a lot more diversity, equity, and inclusion.” There has also been more time for students to pitch ideas for projects they were hoping to work on, which Mr. Griffa was now able to be more flexible with.

Mr. Griffa was also diligent about revisiting his approach to choir by consulting students and colleagues. With finding new activities and projects to work on, Mr. Griffa has turned to Facebook groups with other choir teachers from across the country to see what their approaches have been and whether or not those might work for the St. Luke’s choirs as well. Mr. Griffa said that adjusting to the Covid guidelines was manageable because one of his biggest fears was that masks were going to slip off of the student’s faces when they were singing, so they had special masks made for this specific reason. However the masks had very little movement, which was a big relief, and the special masks were not needed, which was one less adjustment that needed to be made.

Mr. Griffa takes choir day by day because everything changes, especially with a rotation of students on Zoom, which can be challenging at times but is also doable. “You are only as strong as the people that choose to be in it,” Mr. Griffa stated about the choir, which he thinks of as a big family.

Thanks to Mr. Griffa’s and Mr. Valera’s hard work, students are still enjoying both courses very much and seem  grateful to  their teachers for keeping the music department up and running this year.

Sebastian Rosario ‘24 said, “Choir this year has been an amazing experience. It’s filled with laughter, joy, and with open arms. Our teacher, Mr. Griffa, has found a way to really help the students express their opinions, in a friendly manner, and it shows that he supports us students.”

Similarly Matthew Stimpson ‘24 referred to band as “very different compared to last year, but Mr. Valera keeps it engaging and fun to play.”

The music department worked very hard to make this year fun for their students and encouraged many different ideas from both students and colleagues in order to ensure a great band and choir experience even during this time of uncertainty. The band and choir students are very grateful for their efforts to continue with these courses and they look forward to another great year next year!