Despite the Title Drought, the Future is Promising and Championships are Near for New York Sports Teams 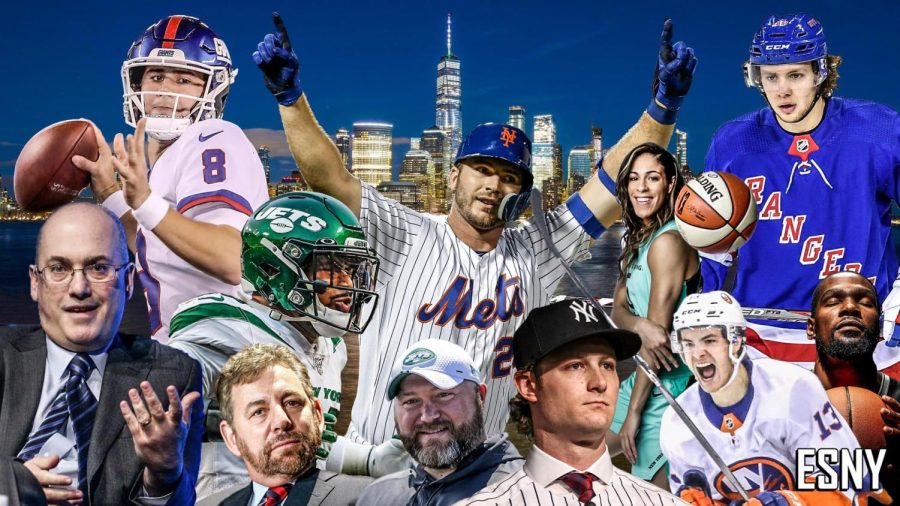 In a city filled with towering skyscrapers, extravagant music halls, and glamorous eateries, there is not a more dominant force in New York City than its sports teams. ‘Greatness’ has historically been synonymous with the New York Yankees, who have brought 27 World Series trophies back to the Big Apple, but each of New York’s eight other professional sports teams have won championships in their respective leagues.  In recent years, however, the fountain of consistent victories has seemed to run dry as the New York metropolitan area has waited 3,522 days since their last championship (a 21-17 Super Bowl win for the Giants against the Patriots in 2012), the longest drought in New York sports history. However, all dry spells come to an end, and with promising futures in several sports, New York sports fans shouldn’t have to wait that much longer for another ticker-tape parade down the streets of Broadway.

New York, one of the biggest sports markets in the world, generally has no problem attracting the star power necessary to make a deep playoff push. Its fan base is famous for packing stadiums and profusely cheering on its hometown teams until the very end. In addition to all that, the mecca of basketball, Madison Square Garden, as well as MetLife Stadium, the state-of-the-art facility of the Meadowlands, are just a few examples of New York’s iconic sports venues.

So why are New York teams having such a difficult time winning championships? Let’s look at  the Knicks, who have not won an NBA championship since 1973 and have one playoff game win in the last eight years. While they have missed out on megastars like Kevin Durant and Kyrie Irving in recent free-agent classes, their weakness has been unstable management. During that eight-year span of playoff misery, the Knicks have had seven coaches, and according to American sports television personality Stephen A. Smith, Knicks owner James Dolan is a ‘National Embarrassment.’

The Mets, who became the closest New York team in recent years to win a championship in 2015, losing to the Kansas City Royals in the World Series, have since had a very difficult time retaining coaches and avoiding scandals. Between the failed hiring of Jared Porter, the booing of fans by star players, and acting general manager Zach Scott getting arrested for drunk driving, the Steve Cohen-owned New York Mets have constantly appeared in the news for all the wrong reasons.

Football has been just as unsuccessful as New York’s other sports, as the Giants and Jets have each had more head coaches since 2012 – five and four, respectively –  than they have had combined winning seasons (two).

Across the board, the common denominator seems to be poor coaching or managing. High turnover within any organization tends to spell out poor results, and New York sports are no exception. Since the Giants Super Bowl win in 2012, the nine New York Sports Teams have had a combined 42 head coaches and 30 general managers. Stability and consistency are what allow good teams to become historic dynasties, just ask Tom Brady and Bill Billichek or Michael Jordan and Phil Jackson.

It would be morally wrong to ignore the success of the greatest team in professional sports history, the New York Yankees, despite their recent shortcomings. If you were to design a sports franchise based on the Bronx Bombers, you would have solid leadership, a culture of discipline, and reputable personnel. While Yankees fans would credit their 27 World Series Championships to stars like Babe Ruth, Joe DiMaggio, Mickey Mantle, and Derek Jeter, the franchise wouldn’t have been nearly as successful without the likes of Joe McCarthy, Casey Stengel, and Joe Torre in the dugout or Ed Barrow, George Weiss, and Larry MacPhail as general managers. As Richard Schuy said, “A great coach not only inspires but supports and encourages others to get results.” A collection of good players can result in a successful season or two, but you need consistency and stability from the coach as well as the general manager to create a culture of winning. The Yankees serve as the greatest example of that.

What needs to happen for the New York franchises to return to the glory days of the past with consistent championships year after year? Even as a New York sports fan, I don’t think any team can match the historic dominance of the New York Yankees, but with stability and consistency in the coaching and management departments, better days are ahead for New York.

Take the Yankees’ recent struggles, for instance. They haven’t won a World Series since 2009 and it does not appear like Aaron Boone will be the manager to break the losing streak. While Boone will forever be inscribed into Yankees folklore as a result of his heroic go-ahead 2003 ALCS home run to send the Yanks to the World Series, he was hired as Yankees manager in 2018 with no previous managerial experience, and the Yankees early playoff exits have occurred under his watch due to the negative culture he promotes. By making comments like “Hitting is hard” and “Andrew Heaney has been considerably less bad than the results,” he is showing the players that there are acceptable excuses for losing. Furthermore, by not removing players during the game after making atrocious mistakes, like Gary Sanchez failing to make a Little League tag against the Mets, Boone is encouraging a dynamic of no accountability within the Yankees organization as they continue to drop important games. So if the Yankees would like to return to their usual championship form, they need to fire Boone and hire a promising manager with past coaching experience.

A successful coach-general manager duo combined with a promising young core of athletes is the x-factor that can make any franchise championship-worthy. The Brooklyn Nets, who are committed to Sean Marks and Steve Nash as the management future of their franchise, appear to be real competitors for an NBA Championship with a stacked roster including Kevin Durant, Kyrie Irving, James Harden, and several solid supplemental pieces from the bench.

Likewise, the Rangers appear to be worthy of returning to the Stanley Cup promised land for the first time since 1994 led by superstar forward Artemi Panarin and left-wing Chris Kreider. Their new head coach, Gerard Gallant, knows what it takes to compete for a Stanley Cup as he took the Vegas Golden Knights to the Stanley Cup Finals during their first year of existence.

The New York Liberty looks to be championship-bound in a few years after hiring Walt Hopkins as head coach. Despite being only one year removed from an atrocious 2-20 record, Hopkins should be able to provide the versatility the team has lacked in recent years, having led the Minnesota Lynx to three consecutive WNBA playoff appearances and one WNBA championship.

Even the Mets have all the pieces to make a World Series run as their new owner, Cohen, has brought all-stars Javier Báez and Francisco Lindor to New York to join ace Jacob Degrom as he looks to design a roster and bring together a front office team worthy of winning the Mets their first World Series since 1986.

So, New York fans, all is not lost. With the right coaching-managing combination and a deep roster of big names and solid role players, one of the New York teams will soon break the losing cycle and deliver with a championship. With its huge market and phenomenal fan base, I would put money on the line that a New York sports team will win a title within the next three years. So get off the couch and buy tickets to support your team and your city; they might just end up as the best of the best.