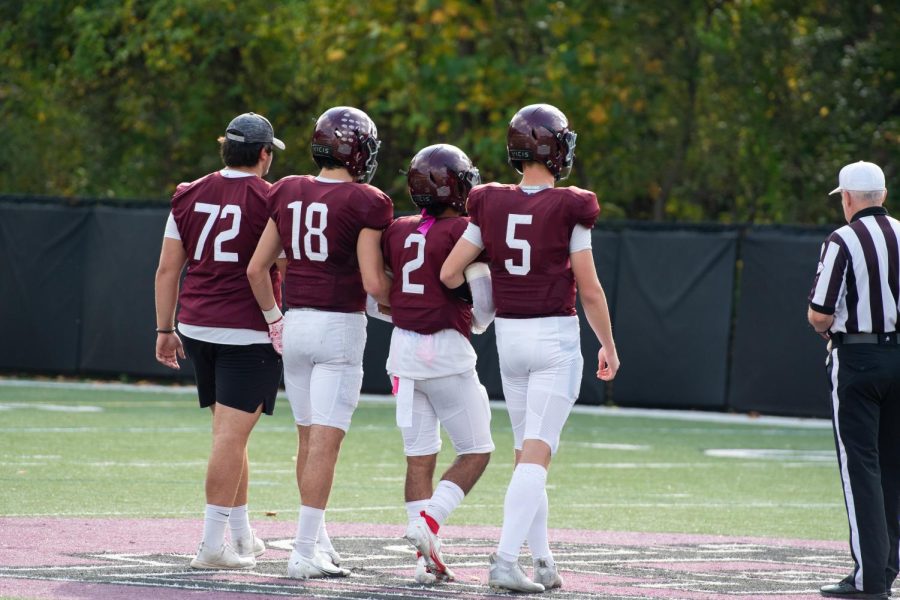 Though the 2021 SLS football season has had its ups and downs, strong leadership from senior captains Brandon Bulerin ‘22, Everett Andersen ‘22, Luke Rioux ‘22, and Matt O’Connor ‘22 have strengthened team spirit and camaraderie both on and off the field.

The football season has been up and down. As Brandon Bulerin said, “It’s a tough battle every game. We’re low in numbers, but that still doesn’t define us.” With a current record of 4-4 and one game left, the team has fought their way through the storm (pun intended) with grit, passion, and persistence.

Through their passion for football, the captains all decided they wanted to be captains for different, meaningful reasons. Following in the Andersen family tradition, Everett Andersen took on the captain’s position like his brothers Kyle ‘15, Quentin ‘17, and Austin ‘21 saying, “Since I love [this team] so much, I wanted to lead it. I’ve been a part of it for four years, [and] on top of that… three of my four brothers have been captains on this same team… That transition of leadership and power… is just really special to me.”

While Everett followed in the footsteps of loved ones, Brandon decided he wanted to be a captain because he “dreamed of being a captain for the longest [time]. … To show that leadership and… lead the guys through the fire.”

With strong opponents, the impact of COVID, and injuries, the captains have shown true determination and persistence.

Both Matt O’Connor and Luke Rioux were new to St. Luke’s last year, and due to COVID-19, this is their first, and only, real season of football at SLS. Luke said “last year [he] felt pretty disconnected from the team” because they weren’t able to spend as much time together. But this year, as he added, “the dynamic has definitely changed. I am a lot closer with them, [and] it’s been a lot more fun.” Matt is in the same boat as Luke, and said that this year “it’s more of a family atmosphere and [I trust] my teammates more. The football team has made me feel like I don’t have to do everything because I trust… everybody.”

Being there for each other is an important value in the football family. Though, it is hard to keep showing up when you are battling an injury. Luke and Brandon both suffered injuries this season. Luke said, “It’s kind of disheartening when you’re not out there, but I’m just trying to stay positive.” To add, Brandon said, “You’re beating yourself up, and you know you could be out there, but this injury is keeping you back… And knowing that I’m hurt, I’m going to show love to my guys and always cheer them on, regardless of any situation.” It is hard to be a captain who can’t be on the field to lead his team, but Luke and Brandon prevailed. They became cheerleaders for a while, and now they are grateful to be back on the field with their teammates.

Despite the challenges of this season, the captains have not only guided the team on the field, but they have also led by example off the field.

In a team of 34 guys, the captains have a large group of high schoolers looking up to them. They have done their best to show the team “that every man is very important to our team,” as Luke put it. However, it can be challenging to be a role model. Matt mentioned that “It’s a lot of pressure to always do the right thing.” And Everett added on by saying “You have more responsibility… But I think it makes [us] stronger [people] for it.”

Throughout their experience on the Hilltop, the Storm Football program has taught the players various life lessons on the value of family and hard work.

Matt said “if we stick together, we’re capable of a lot more than we think.” The team is able to accomplish countless goals together, both in practices and games, through the brotherhood that has been created. As Brandon said, “When I came here… I was welcomed with [open] arms by the whole team.” The family that Brandon has found here, as he added, “are my guys forever,” and that emphasis on family is “rule number one in brotherhood.”

Another lesson that has greatly influenced the team is the value of hard work. Everett said, “Whether or not you work hard for something is the most important thing. [Because] you can work hard and get something, and you deserved it. But you could also not work hard for something and also get it, and… there’s something maybe in the back of your mind saying ‘Do I deserve this? Did I earn it?’” The act of giving 100% effort regardless of the outcome will stick with the seniors for years and years to come.

In addition to working hard on the field, Luke also mentioned “the value of being a student athlete and [taking] care of [our] academics.”

In addition, Brandon also found that “sometimes you have to take a step back in order to progress and have a great successful year.” With one game left in the season, the captains are soaking up every bit of Storm football they can. “This whole team is so full of excitement and full of love,” Brandon said, and win or lose, they always have each other and a home in the Storm Football Family.