Celebrating Our Seniors: A Reflection on Their Last Year on the Hilltop 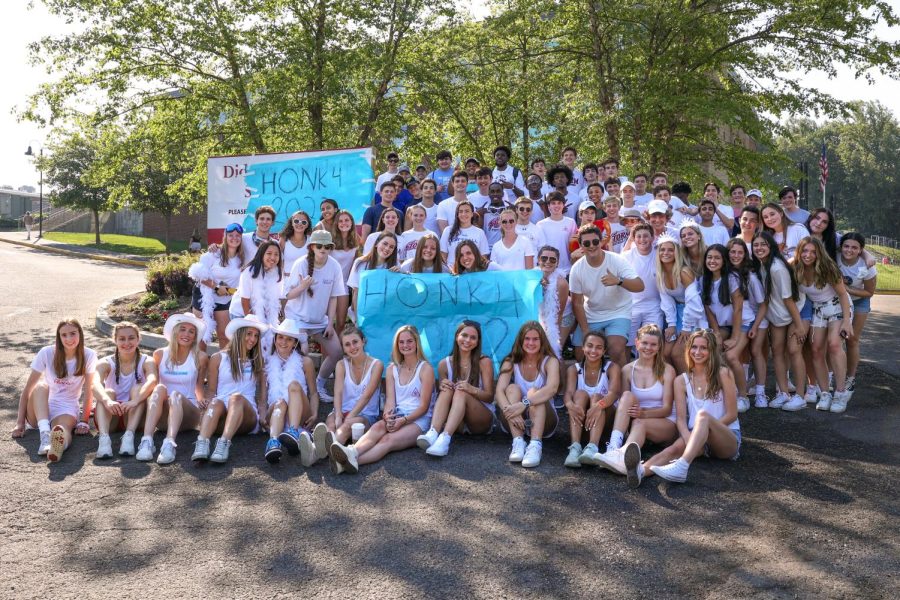 As the 2021-2022 school year winds down, the Class of ‘22 is preparing to say goodbye to St. Luke’s for good. To help wipe away those tears, here is a collection of memories from this year’s seniors filled with joy and laughter.

Dillon Mannix: My favorite memories from this year have to be the pep rally and Homecoming. After being isolated for a while, it was great to see the whole St. Luke’s community come together again in the fall to watch all of the fall varsity teams compete. Also, having been at St. Luke’s since 6th grade, I remember sitting in the stands cheering on our sports teams during the pep rally. Being a senior and finally out on the floor, it was surreal to see how far I had come and made me think about all the great moments I’ve had with the friends I have made at St. Luke’s.

Calvin Stuart: A favorite memory of mine is when we beat King in football 42-3. It felt really good to be with friends, have a great time, and embarrass our rivals. Everyone was playing extremely well, so nobody was down on themselves for the way they played. It was an all-around great team win and a great way to start off our season.

Aren Cummings: My favorite moment for sure was when we (basketball team) won the FAA championship at Brunswick. It was such an emotional win, and we overcame a lot. Second favorite is when I dunked on the kid from GFA.

Everett Andersen: I remember being at Johnny’s house, and we were talking with his dad.  As we were talking and joking around, he made a funny joke, asking if we “could see him” as he thrust himself against the column of the house. We all laughed and had a great time.

Harrison Lambeth: My favorite memory from this year was the sports teams. Playing football with such a great group of guys couldn’t have been more fulfilling, coaching middle school basketball was definitely an experience, and ending with baseball right now is a perfect way to close out the year.

Nicholas Besgen: Signing day was really special. I was able to share that day with friends, and I appreciated everyone who showed up.

Sloan Barker: [The] first round of [the] FAA field hockey tournament…was a home game, and so many students and faculty came to support, giving us the strength to pull out a win to a team we had lost to earlier in the season. We had so much support from the school, and it gave us the energy to step up our competitiveness and outplay the other team. It’s a memory I’ll never forget.

Alex Staikos: I would say a good memory was when we were performing at Blues Band, and all of the seniors piled around the stage for Life is a Highway. That was pretty awesome to me.

Sean Clemons: The most fun memory of this year was when the basketball team won the FAA championship. The entire season we were doubted, and during the championship game, we showed our resilience in our comeback win vs Brunswick.

Alexandra Winham: My best memory from St. Luke’s has been our junior field day in 2021. It was nice to have an activity together that celebrated our grade in a way that was not too formal, and I enjoyed being able to spend time with my friends and peers.

Sophie Blomberg: [My favorite memory was] one of the football games at King… where it was a white-out and a bunch of the seniors came out to support it was so much fun!

Anna Bradley: One of my favorite things this year has been me and my friends crammed onto Ms. Bell’s couch (sometimes on the weekends!) and just talking to her for hours.

Brandon Bulerin: Me, Chris, Josh and a few others were playing Super Smash Bros on the TV in the cafe for a whole period. The tournament was spectacular!

Andrea DiTeodoro: One memory I have from my senior year is beating Rye in the first round of the field hockey FAA playoffs. It was the first time we had been in the playoffs since any of us had been on the team, and we bounced back from losing to them in overtime during the regular season. We came out with so much energy, and we played with heart, hustle, and passion. It was so amazing to win this game with such a special team.

Josh Harper: A good memory I have from this year is probably winning against our rivals GFA or the championship game against Brunswick. Hearing our families cheer for us while our friends [stormed] the court was pretty cool.

Tommy Lewis: I landed my first kickflip in the SLS senior lot after months of trying in my driveway and skateparks.

Kate Ellis: My field hockey senior day was great because most of our seniors have played every year together since 5th grade, so it felt like the end of an era. It was super cute and emotional.

Lili Messina: I loved when the class parents put together a s’mores and hot chocolate stand outside by the fire pit for the senior class. It was such a sweet treat, and everyone had a great time with each other enjoying the warm fire outside.

Matt Monterosso: [My] best memory is definitely the locker room after the Proctor [football] game with everyone dancing and screaming after the upset.

Shannon Rust: Almost all of my favorite memories from senior year have taken place in the college counseling office. Especially during club time or C period when it is completely packed, because then everyone is laughing and having fun. Two of my favorite memories to be specific [were] when Lili picked up the ukulele and started playing it with all of my friends and I packed onto the couch, and [we watched] Lemonade Mouth together. Having the college counseling office this year has been so so special, and I finally understand what all the seniors mean every year when they say that it is their favorite place in the school.

Matthew Sherter: My favorite memory from senior year would be Soccer Senior Day. Getting to come to school and see my cutout, getting good minutes in the game, and then enjoying a nice banquet with the team afterward was a lot of fun.

Ryan Frank: My favorite memory this year was the FAA Championship game for our basketball team at Brunswick. The environment and crowd was just absurd and was really fun to be a part of.

Will Stamoulis: The class parents organized s’mores for the entire class during a club period. It was very fun.

Will Winalski: Cross country had our final race at Sherwood Island. I didn’t really want it to be a normal race. So rather than running at a normal pace, I sprinted the first 30 seconds and held the lead for that time. It was by far the worst time I’ve gotten at a race by around 5 minutes.

Ella Miller: ​​I think one of my favorite memories would definitely have to be the day all the seniors wore their “it2 our hou2e” shirts and waved at the cars pulling into school. I feel like our grade really felt united for the first time in a while, and coming together to celebrate our accomplishments and kick off our final year at St. Luke’s together is a memory that I’ll forever remember.

Cheers to our Class of 2022 seniors, and here’s wishing you all nothing but luck in wherever life takes you!