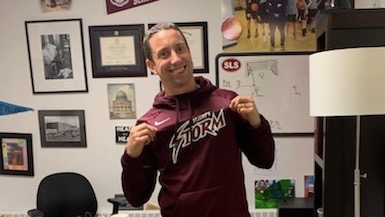 For the past few years, St. Luke’s students have had the privilege of being able to wear Storm sweatshirts to school as part of the dress code. As these sweatshirts provide a comfortable alternative to the otherwise unpleasant oxford button-down uniform, many students opted to purchase one for school use. However, as the 2019 school year began, students discovered upon checking the school handbook that sweatshirts are no longer approved as dress code. Response to the new policy was somewhat varied, from students who didn’t even notice to students who emailed the administration, outraged by the recent decision.

While Brody Menzies stated, “I don’t own any St. Luke’s gear at all so it’s not a massive issue for me,” Eli Gilespie claimed, “I only bought a sweatshirt because they told us we could wear them in school. Now I want my money back.”

Jerry Rutigliano also complained about the inconvenience: “Well, now I’m forced to actually wear dress-code, and it’s tough because I don’t have a lot of quarter zips.”

Students continue to express annoyance over the policy, as the school is getting colder with the changing seasons, and they will now be forced to turn to other methods of staying warm in class.

When asked about the factors that influenced the deans to change the policy, Mr. Ward stated, “An issue was that close to 90% of the dress code infractions that we got in the last 2-3 years were mostly because of sweatshirts….[T]he rule was put in place a few years ago, [and] like anything else, when it started to be abused, we just took it away.” One of the main issues with the previous sweatshirt policy was that students would not wear a button-down shirt underneath their sweatshirts, thus breaking dress-code.

Mr. Ward added, “I think it could change in the future. I’m definitely open to it. I think we just got to the point where so many people were out of dress code and blatantly breaking the rules… it became easier and more efficient to just say no sweatshirts.” He did express regret over the fact that St. Luke’s apparel is rather expensive and now can no longer be worn during the day.

Although the removal of sweatshirts from the dress-code can be viewed as somewhat of an inconvenience, the handbook does not restrict the usage of polar fleeces or ¼ zip pullovers, so students should definitely consider stocking up on some for the cold winter season.