Newcomer Hendricks ‘22 at the Helm for Storm Volleyball

Though new to St. Luke's, the sophomore has used her leadership skills and team friendships to adjust to the crucial setting position. 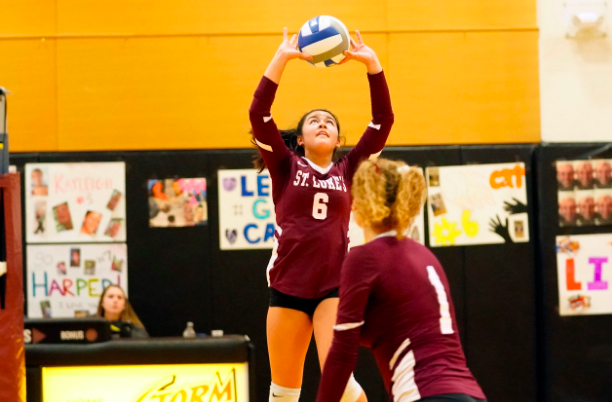 In volleyball, the setter controls the court and runs the team’s offense. She analyzes opposing defenses and uses that information to decide which hitter has the greatest chance of scoring – all within the few seconds that the ball is in the air. Given the responsibility that accompanies this position, it may surprise fans that the ‘quarterback’ of SLS volleyball is a newcomer to the team.

Catalina Hendricks ‘22 is playing with St. Luke’s for the first time this season. Though the switch from Norwalk High School was difficult, Hendricks’s teammates helped smooth the transition.

“Meeting all of the girls during preseason really made me feel extremely welcomed and reassured my feelings towards this huge change in my life,” Hendricks shared.

Hendricks was an invaluable addition to the program because having a fresh face in the gym has compelled the team to develop stronger relationships with each other.

“I think bringing an athlete into the program who has no history with the group can be a great equalizer across the board,” head coach Garrett Minyard commented. “There is something really special about not only having to meet and get to know the new people around you, but also develop a strong enough relationship with those individuals that you can achieve a really high level of success in a short period of time.”

Hendricks has quickly developed friendships with her new teammates, and she believes their camaraderie has benefitted them in competition.

“On the court, everyone gives their all and makes choices based on how it’s going to help others. Everyone is so supportive and caring–it’s really great to see,” Hendricks shared. “Off the court nothing changes; everyone is friends and it’s so much fun. Having teammates as some of your best friends is truly one of the best relationships you can have.”

Adding Hendricks to the team has also helped reinvent the Storm volleyball system. As the team’s starting setter, Hendricks runs the offense and touches the ball on every point.

“Cat is responsible for putting her attackers in successful situations by deciding who gets the ball, how often they get it, and in what situations they will get set more,” Minyard noted. “That’s a lot of responsibility, and she has done a wonderful job managing it thus far.”

Though the skill may look simple, Hendricks admits that setting is no easy task.

“Having to make choices for the team in the middle of plays is extremely challenging sometimes,” Hendricks said. “There are always different situations based off of passes, and being prepared to give hitters the same ball every time no matter what is extremely difficult.”

But Hendricks is determined to master her difficult role, and she leads her team by example by working hard in practice every day.

“Cat’s largest impact on the team has come from her tenacity and competitive drive on the court,” Minyard shared. “Cat understands the rigor that comes with setting high standards for a team and working towards success, and she commits herself to the grind day in and day out.”

Hendricks’s hard work has certainly paid off, as she led SLS to an electric 3-1 win over rival GFA on Homecoming. Hendricks recorded 3 aces, 4 blocks, 2 kills, and 39 assists in the match.

“That game was the best we have played all season, and it really showed. Every point mattered, and all the girls gave it their all. The energy on and off the court was insane,” Hendricks remembered.

As the Storm begins preparation for postseason play, Hendricks knows how her team can grow and is determined to help them succeed.

“The team can continue to improve by keeping the same mindset and energy we all had during Homecoming. The feeling after that game was insane, and I know everyone wants to experience that again. We just need to have the desire to improve every day in practice and learn as much as we can.”

Hendricks will be a crucial part of the team for the next two years, and her leadership, work ethic, and competitive mentality will certainly help Storm volleyball rise to unprecedented heights.